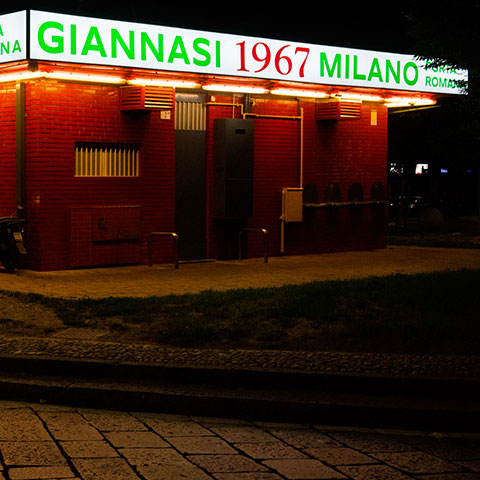 An old hen makes good broth, isn’t it? We couldn’t find a better opening for this section about historic shops in Milan than the roasted good shop Giannasi, the Milanese answer to KFC. Chicken (sorry veg friends) is the universal language of nutrition, a dish with an incredible number of varieties all around the world – Milano has its own representation chicken.

The history of the most famous chickens in Milan dates back to the Sixties, when Dorando Giannaso, newly arrived in town, begins his career where every young man should: as an apprentice in a poultry shop. It took some years and some changes to become the chicken king (which may not sound good, but it’s actually a compliment). The real revolution started when Giannasi decided to become a real deli, instead of selling only raw meat – an entrepreneurial masterstroke. Since then the queue at his kiosk has become longer and longer, until resembling today a Bruce Springsteen concert, especially in the rush hours. To be honest, whoever passes by and goes home empty-handed must have some olfactory problem, because for any normal human being the delicious smell of roasted potatoes is enough to start looking for his wallet. Giannasi is obviously more expensive than a simple deli, but his history and the quality of his products make up for the extra Euro. And don’t forget that we’re talking about a take-away, which is cheaper than any restaurant (if take-away food had its own Michelin star, Giannasi would certainly have one). So we challenge you as a modern time Ulysses: go nearby Piazza Buozzi at lunch time and try to resist the olfactory mermaids of the most famous roasted chicken shop in Milan. If you make it, you have an iron will. Well done. Now forget about it and enjoy life.